Acronym:
QiGeom
Title:
Quantifying ice-ocean interactions with geophysical measurements and modelling
Duration:
02/01/2022 to 01/01/2023
Abstract / short description:
Snowfall in the interior of marine ice sheets (i.e. ice sheets resting on a bed deeper than sea level) is balanced by ice flow towards the boundaries. Ice becomes afloat at the grounding-line where the ocean is first encountered. Seawards, ice spreads rapidly forming floating ice shelves which extend over hundreds of kilometers. Virtually all ice shelves are laterally constrained by embayments. The enhanced friction results in a backstress decelerating the upstream ice flow. This backstress is referred to as buttressing, and it describes a major mechanism controlling the stability of marine ice sheets.

A breakthrough in global change research in the last two decades is the recognition that marine ice sheets are acutely sensitive to their interaction with ocean water (e.g. IPPC AR5, ch. 4, p. 357). Ocean-induced melting at the grounding-line can trigger grounding-line retreat eventually causing the entire ice sheet to collapse. This instability is mitigated by the floating ice shelves through buttressing. However, observations over the last decades have shown that ice-shelves in Antarctica can rapidly disintegrate causing grounding-line retreat, ice-mass loss and sea-level rise. Despite the recognized importance of ice shelves, one of the biggest unknowns today is what controls ice-shelf integrity. Our lack of knowledge is rooted in the nature of basal melting that varies spatially from meters to hundreds of kilometers, and temporally from seasonal to centennial (and longer) time scales. This proposal tests the hypothesis that sub-kilometer scale variability in volumetric and interfacial ice sheet/shelf properties can both increase or decrease ice-shelf buttressing depending on different combinations of radar detectable properties such as temperature, density, mechanical anisotropy, basal crevassing, basal channeling, and the basal mass balance. This hypothesis is important because coupled ice-ocean simulations are yet in their infancy and need to apply bulk parameters over large spatial scales deteriorating sea-level forecasting. In this proposal, I quantify all relevant spatial scales from the information that is stored in the ice volume, its internal (radar) stratigraphy and base. This includes mechanism operating on sub-kilometer scales (e.g. subglacial conduits, sediment wedges, basal terracing) which have macro-scale expressions in ice shelves. Addressing this problem requires 3D images of these sub-kilometer scale features which are currently not available. I will develop 3D georadar approaches to address this shortcoming. Outcomes from this project include both technological and scientific advances such as: (1) new technical development of an automated, robotic wide-angle radar platform for 3D imaging, (2) an observational baseline for improving ice-ocean models, and (3) identification of the primary mechanisms for rapid ice-sheet collapse, thereby constraining uncertainties in sea-level change projections.
Keywords:
geophysics
Geophysik
glaciology 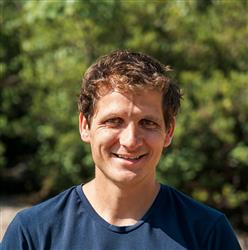 Department of Geoscience
Faculty of Science
University of Tübingen