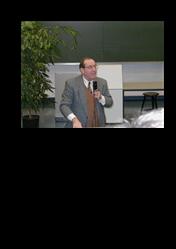 Determination of the Majorana-Neutrino-Mass by the neutrinoless Double Beta Decay.

One of the big unknowns in the very succesful Standard Model of Particle Physics are the electron-, the muon- and the tauon-neutrino mass. With the help of the neutrino-oscillations one can determine the other two neutrino masses, if one is known. The analysis of the newest data for the upper limit of the transition probability with our matrix elements yields an upper limit of the  electron Majorana-neutrino mass of about one electronvolt. Why is the mass so small?

Our experimental colleagues from Tuebingen together with experimentalists from Heidelberg and Muenchen search for the experimental transition probability of the decay 76Ge --> 76Se + 2e-. We in the present  project calculate the matrix elements for the transition to the 0+ ground state and the 2+ excited state of the final nucleus.

Determination of the Neutrino-Mass by bound Electron-Capture.

Independent if the neutrino is "Majorana" (identical with the antiparticle) or if it is "Dirac" (different from the antiparticle), its mass can be determined by bound electron capture. This is the topic of a DFG Schwerpunktsprogramm, with the experimentalists in Heidelberg, Mainz and Tübingen and the theoretical extraction of the neutrino mass in Tübingen by our group. For electron capture of a bound electron in 163Ho

the energy available for the decay is the Q-value given by the mass difference of the ground states of the initial Ho and the final atom Dy. This energy Q is then divided between the atomic  excitation of Dy* and the total engy (kinetic and rest mass) of the neutrino. The difference of the Q-value and the highest excitation of the Dy* atom is the rest mass of the neutrino.

Due to the large mass of the nucleus the recoil of the decay system can be neglected in this energy balance.

Hadrons in Vacuum, Nuclei and Stars
since 2001
European Graduate College Basel - Graz - Tübingen "Hadrons in Vacuum, Nuclei and Stars". Properties of hadrons and simple hadronic systems like e.g. the pionium, the pion-nucleon interaction and the interaction between baryons are investigated experimentally and theoretically. Nucleus-nucleus collisions allow the study of…